You are here: Home Boeing

The Boeing 737 MAX has been making a slow but steady return to service around the world since the type’s ungrounding late last year. Analysis shows that more than 100 MAX aircraft are now in active use by around a dozen airlines.

According to new analysis by Cirium, more than 100 737 MAX are now back in service with their airlines. In total, more than a dozen carriers have reactivated their fleet, with airlines in Brazil, the US and Europe leading the way. Considering that the MAX fleet globally peaked at 360 aircraft in service early in 2019, there’s still some way to go, but it’s positive steps in the right direction.

Up to March 3rd, more than 1,300 flights have been logged using the 737 MAX. The most prolific airline was American Airlines, which has put into service 27 of its 31 current aircraft, operating almost 400 services with the fleet. 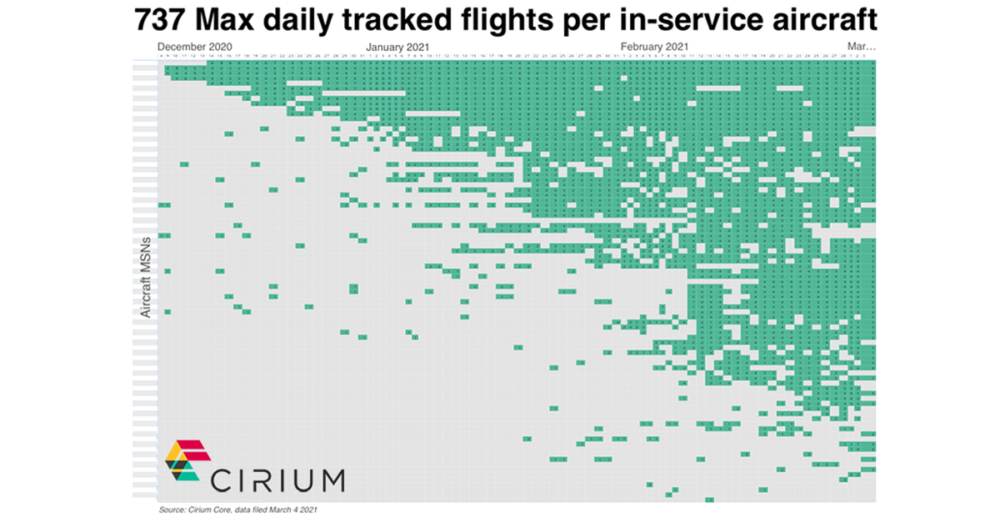 Data from RadarBox.com shows that American’s 737 MAX 8s have, on average, operated 2.1 flights and airborne for 4.6 hours each day. That’s around half the usage the airline is getting from its other narrowbody aircraft, with the 737-800s flying for 7.6 hours per day and the Airbus narrowbodies as much as 8.4.

In terms of utilization, it’s Brazilian airline Gol which is leading the way. Gol was the first airline to fly the MAX on a commercial service following the ungrounding and has been taking firm strides to reactivate its fleet in a big way. Its 737 MAX 8s have been flying an average of 4.5 flights each day, averaging air time of more than 10 hours!

Stay informed: Sign up for our daily and weekly aviation news digests!

United Airlines provided a much-needed boost of confidence in the MAX program earlier this month when it announced an additional order for the type and an accelerated delivery schedule. Nevertheless, its current fleet has been resuming passenger service rather more slowly than some of its counterparts.

According to RadarBox.com, the airline has been flying its 737 MAX 9s for just 1.7 hours per day, and on short segments too. The average flight duration has been just 1.4 hours. This is in stark contrast to how it uses its older 737-900s, which fly an average segment of 3.1 hours across just under three flights per day.

Slowly returning around the world

Across the pond in Europe, TUI has been making use of its newly returned 737 MAX. The airline first flew the MAX from Brussels to Malaga in mid-February, and a week later took delivery of a brand new model from Boeing.

For the Group, with its subsidiaries in the Netherlands, Sweden, Brussels and the UK all flying the MAX, the overall return has been slow. With lockdowns still hampering travel demand, it makes little sense to reactivate the whole fleet. Even so, some TUI MAX have been spotted taking flights to nowhere, suggesting they are being reactivated and readying for service entry.

The next airline to resume flying the MAX will be Icelandair. The airline has scheduled its first MAX 8 flight from Keflavik to Copenhagen on March 8th.

Elsewhere in the world, flydubai is readying the MAX for a return to service, and various other authorities have approved the type to fly. One regulator that is conspicuous in its absence of a reauthorization is China. The CAAC has said that it is not ready to recertify the MAX yet, and intends to undertake its own assessment of the type before approving it to fly.

Boeing Is Working On A Solution For Grounded 737 MAX Jets

FAA To Require Checks Of All US Registered Boeing 787 Dreamliners