You are here: Home Airlines News

When planning leisure trips and vacations, some travelers might make plans as far out as a year in advance. The global health crisis put a swift stop to that, making any plans involving international travel a gamble. However, seeing a light at the end of the tunnel, Air Canada is adding a number of non-stop flights to Hawaii from major Canadian cities this winter. The airline looks to capitalize on some pent-up demand as it emerges from the crisis.

Direct from the ‘other side’ of Canada

Historically, non-stop services from Canada to Hawaii have come from the western part of the country – largely from Vancouver and Calgary. However, this will change for Winter 2021 as Air Canada launches its first Montreal–Honolulu and Toronto–Maui services.

The airline says that the new flights will complement the airline’s long-standing services from Calgary and Vancouver to the Hawaiian Islands and will also be timed to allow for convenient connections across Canada as well as from Europe.

“We are seeing strong demand in the sun markets this winter with people in Canada and around the world looking ahead to holiday travel. As we finalize our schedule to position Air Canada’s leadership in leisure travel this winter, we have added new non-stop flights to Hawaii from Montreal and Toronto in addition to our flights from Calgary and Vancouver…” –Mark Galardo, Senior Vice President, Network Planning and Revenue Management at Air Canada

Galardo adds that customers from Europe will be able to easily connect to the airline’s Hawaii flights from its Montreal and Toronto hubs.

The airline has posted its Hawaii schedule on its website, showing the new flights to Honolulu (HNL), Maui (OGG), and Kona (KOA). For your convenience, Simple Flying has embedded the schedules below, which show flights from Vancouver, Calgary, Toronto, and Montreal. 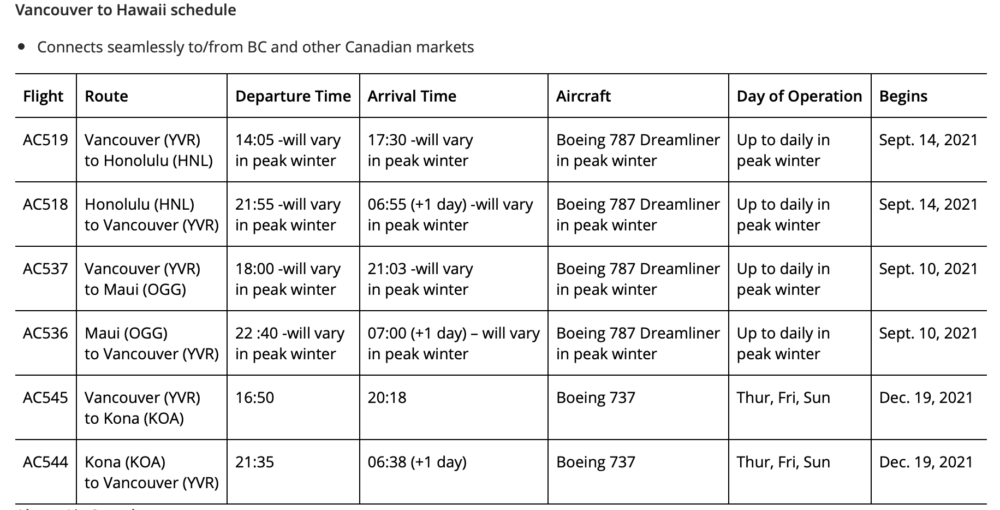 As you can see from the above, any services from the eastern side of Canada involve the Boeing 787. These flights will be timed to offer connections from European cities such as London, Frankfurt, and Brussels – as well as other parts of Canada.

This may be a fairly lengthy trip for Europeans. Flying to Hawaii from Toronto would take over 10 hours heading west and nearly nine hours going east.

Is it a safe bet?

With vaccination rollout continuing, Air Canada is hoping that the global health crisis will subside enough to cash in on pent-up travel demand and a more stable travel situation. Indeed, in addition to being burned at the onset of the health crisis, some travelers (mainly those in Europe) have been caught up in sudden changes in border restrictions and quarantine requirements, depending on the country of origin.

To offer some sense of security, Air Canada is highlighting its new refund policy. This includes offering customers options of cash refunds or:

Do you think the airline is making a safe bet? Or do you think there is still too much uncertainty with the global health crisis? Let us know in the comments.